If you are the copyright holder of any of the photos on this page and don't wish to have it on this website, contact webmaster@canadianracer.com and I will remove it. Otherwise, thank you for your contribution to Canadian racing history.
This articles covers how club racing weekends have changed (at least in Ontario). This is not meant to be an all-encompassing discussion but rather a quick overview from a spectator's point of view.


The first change is the schedule. Today, Fridays are an optional day and the actual weekend covers Saturday and Sunday. As you can see from the below schedule, in the 1960s, a club weekend was contained to the Saturday only. This is partly due to the fact that it was illegal to race on Sunday. This changed in the late 1960s.

The format has changed greatly since then. Today, competitors get practice time, qualifying and up to three races each. In 1962, it was warm-up in the morning and races in the afternoon. The last race of the day was the feature event and was typically open to the top finishers of the earlier races with the winner being declared the winner of the event i.e. "The Indian Summer Trophy Races", "The Spring Trophy Races", "The Great Lakes Trophy Races", etc.The photo of Ludwig Heimrath at the bottom of this page is an example. The weekend was topped off by the trophy presentations and banquet at a local hotel.

Two typical things are missing from the schedule above: motorcycles and novice races. In the 1950s and 1960s it was common to have motorcycle races on the same weekend. This was especially true for BEMC, as they had their start organizing motorcycle races. Novice races were a way to separate the new competitors from the more experienced ones. Their performance was monitored by the marshalls and in time, were allowed to run with the regular racers. 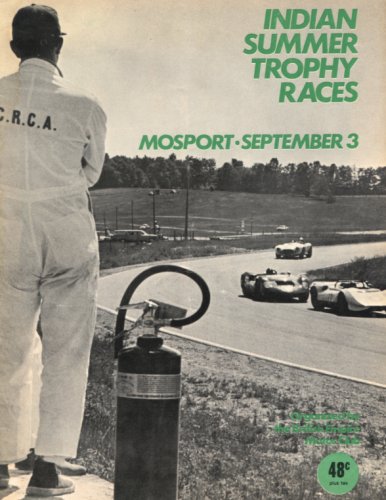 ×
The schedule from above came from the weekend's souvenir program. This particular program cost 25 cents, tax included. The programs were pretty bare in the 1950s but improved through the 1960s. The quality of the souvenir program also depended on the club that was organzing the event. BEMC usually put together a very good one with photos and short articles in addition to the schedule and driver entries. Smaller club's programs often were only a few pages and only listed the entries and schedule.

This leads us to the third item that has changed: attendance. Each club operated differently but most weekends were open to spectators. The occasional weekend was closed to spectators; often this would be a Novice weekend. Weekend attendance would be as low as a few hundred or up to 5,000. 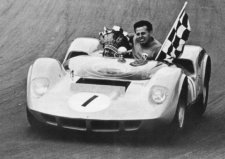