Discuss this Article
If you are the copyright holder of any of the photos on this page and don't wish to have it on this website, contact webmaster@canadianracer.com and I will remove it. Otherwise, thank you for your contribution to Canadian racing history.

The groundwork for the first-ever USAC Indy Car race in Canada was laid in 1966 during the Kawartha 250 USAC Stock Car race at Mosport. Canadian Billy Foster was competing in that race and also brought his Indy Car for a 10-lap demonstration. The demonstration also served as a test to see how the Indy Cars would handle Mosport. With the test a success, work began on getting USAC officials to schedule a race for the following year.

The Indy Car visit was scheduled for June 16-17, 1967 in a 200-lap event called the Telegram Trophy Race. This was only the second time in history that the USAC Indy Cars had raced on a road course. The previous autumn they had competed at the Mount Fuji circuit in Japan. Mario Andretti's crash in qualifying
×
Unfortunately for everyone involved, the weekend was filled with rain. Since the series normally only raced on ovals, there was no provision for a rain event. The rain cut into the scheduled practice time so that when the cars rolled out for qualifying the drivers still had little experience with the Mosport course. Mario Andretti crashed into the turn 10 guardrail during qualifying when he hit oil dropped by Jim Hurtibise. At the end of the qualifying session only 17 cars had taken a qualifying run. The remaining five spots would be filled by any drivers in the top-10 USAC points. Any remaining positions would be filled by a draw. Car owner Gordon Van Liew pulled his two drivers Ronnie Bucknam and Larry Dickson from the event in protest. Bobby Unser took the pole position with a time of 1:26.22.

Race day on Satuday, June 17, 1967 was overcast and threatening rain. The day began with two races for the local racers. The first race was a 12-lap Production Sports Car event won by Al Pease. The second was also 12 laps and was for sedans. This race was won by Craig Fisher.

After lunch, the 22 starting cars were rolled onto the grid in front of 39,500 fans. Tony Hulman, president of the Indianapolis Motor Speedway, gave the command to start engines. The rain started falling immediately after and the start of the race was put on hold. As the afternoon wore on and there was no sign of the rain letting up, a quick race was put together consisting of the production sports cars and sedans that raced earlier in the day. That race was won by Ray Gray.

Finally at 5:15 pm the race was officially postponed and rescheduled for July 1. Lloyd Ruby's car is rolled onto the grid


The event was to be split into two 40-lap, 100 mile heats. The crowd was even larger this time - over 52,000 fans in attendance. Bobby Unser started on the pole for the first heat with Lloyd Ruby along side. Some of the top drivers had not completed their qualifying two weeks before. Mario Andretti, A.J. Foyt, Bob Harkey, Joe Leonard and Art Pollard obtained their starting positions based on their USAC points and would start at the back of the field.

Llolyd Ruby got the jump on Unser at the drop of the green flag and took the lead and held it for the first 15 laps. Ruby had to pit due to a cut tire which gave the lead to Unser. Mario Andretti snapped a half-shaft on lap 5 and spent most of the first heat in the pits getting it replaced. Foyt had rad problems and despite moving up to ninth place, was never in a position to challenge for the lead.

Mario Andretti rejoined the race on lap 38 and put in the fastest speed of the weekend at over 178 MPH. Roger McCluskey made a charge in the final six laps and made up 6 seconds on leader Bobby Unser. He didn't have enough time and ended only a car-length behind Unser for second spot. Gordon Johncock took third, Lloyd Ruby came back from his pit stop to finish fourth and Arnie Knepper was fifth.

The skies were darkening and were looking very threatening so the time between heats was reduced. The cars were quickly refueled, new tires put on and lined up again for the second heat. The starting order of the second heat was the finishing order of the first heat. That meant that Bobby Unser and Roger McCluskey would start on the front row.

Bobby Unser leads the way in turn 10 during the second heat
The second heat was quickly under way and Bobby Unser took the lead. The rain started falling on lap two and the yellow flag came out. The cars held position for the next four laps and on lap six the race was red-flagged and the checkered was shown.

Unser was the overall winner of the event and picked up $17,750 for his win. Roger McCluskey was second and Gordon Johncock, third.

After the race Bobby Unser defended USAC's decision to call the event, "We try to give the people good, hard racing. We feel we can't do that in the rain. Sure, we could run in the rain, but it wouldn't be a race."

The drivers wait for the start 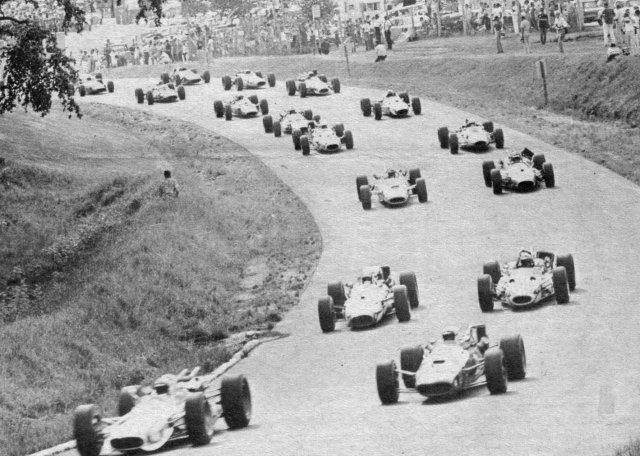 Pace lap at Tremblant
The USAC Indy Cars returned to Canada a little over a month later for the Labatt Indy at Le Circuit Mont-Tremblant on August 6.

Bobby Unser took the pole with a time of 1:39.38. Like Mosport, the Tremblant race was ran in two heats. The heats were 36 laps each this time. There were about 41,000 fans in attendance.

One of the supporting races that morning was for production sports cars. Bill Brack started at the back of the 22 car field and charged to a second place finish behind winner Francis Favreau.

The start of the first Indy Car heat was delayed by an hour to clean the track of oil left over from the supporting races. In the first heat, Mario Andretti started third but took the lead on the first corner and led every lap on his way to victory. Bobby Unser was running in second until his engine blew on lap 10. Bill Vukovich, Jr dropped out due to a broken fuel line. Bruce Jacobi broke a front axle at the entrance to Namerow Corner and one his wheels bounced into the crowd, slightly injuring two spectators. 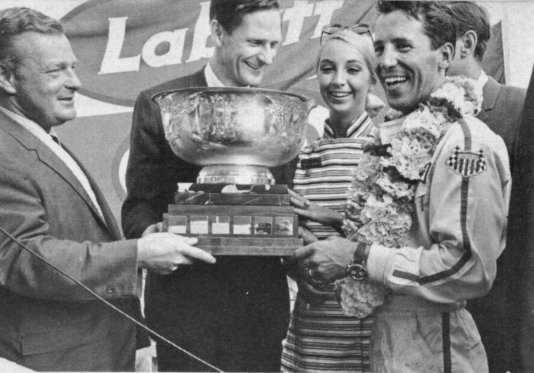 
The second heat was lined up according to the finishing order of the first heat. Bobby Unser was able to enter the second heat when he borrowed Johnny Rutherford's car. Rutherford loaned the car so Unser would have a chance at maintaining his USAC points lead.

Andretti dominated the second heat as well, eventually taking a 30 second victory over A.J. Foyt. Lloyd Ruby was third. Andretti picked up $13,000 for his win. 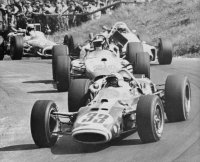